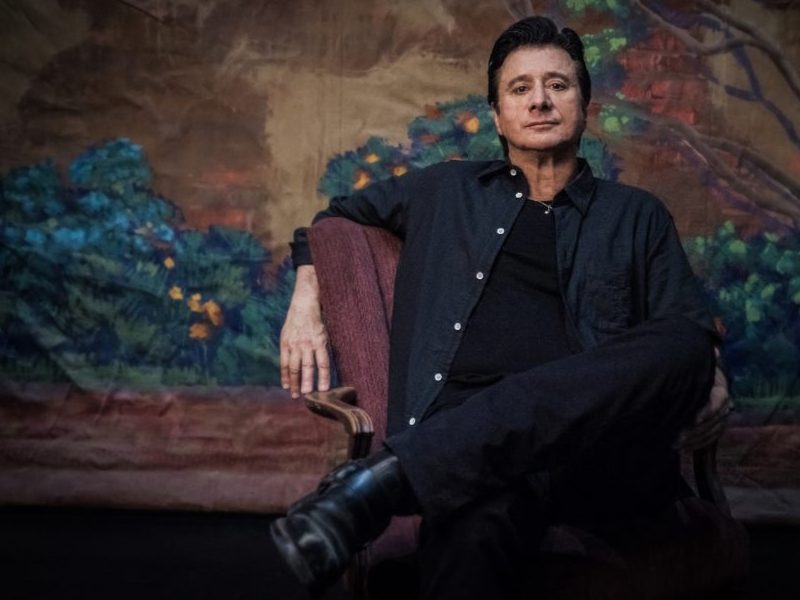 Traces marked a long awaited return from Perry, who is best remembered for his tenure in Journey in which he wrote or co-wrote such standards as “Don't Stop Believin',” “Any Way You Want It,” “Who's Crying Now?” “Separate Ways (Worlds Apart),” “When You Love A Woman,” “Lovin', Touchin', Squeezin,'” “Open Arms,” “Be Good To Yourself,” “Stone In Love,” “Still They Ride,” “Feeling That Way,” and “Lights.” Perry scored a solo Top 10 hit with 1984's “Oh, Sherrie,” which peaked at Number Two.

Journey's last album with Steve Perry was 1996's Trial By Fire, which reunited the classic Escape/Frontiers lineup of Neal Schon on guitar, Ross Valory on bass, Jonathan Cain on keyboards, and Steve Smith on drums. The album peaked at Number Three on the Billboard 200 charts — with its single, “When You Love A Woman” hitting Number One on the magazine's Adult Contemporary chart. Perry left Journey in 1998 rather than be forced into hip-surgery so that the band could tour behind Trial By Fire. He briefly reunited with the band onstage in 2017 to make an acceptance speech during their Rock and Roll Hall of Fame induction.

Steve Perry made headlines back in 2014 by performing encore cameos at concerts by alternative band Eels in Los Angeles, California; Washington, D.C.; and St. Paul, Minnesota. The rock world began buzzing over a Perry comeback — or a possible return to fronting Journey — after his show stealing renditions of such favorites as “Open Arms” and “Lovin' Touchin' Squeezin'.”

Last year, former-Journey bandmate Neal Schon offered an invitation for Perry to join his side band Journey Through Time onstage during their then-upcoming Northern California gigs. In October 2018, during a chat with Rolling Stone, Perry made it clear that despite Schon's frequent offers, he's choosing to pass on working with him, explaining, “I’m not sure that’s possible without stirring up hopes of a (band) reunion. Please listen to me. I left the band 31 f***ing years ago, my friend. You can still love someone, but not want to work with them. And if they only love you because they want to work with you, that doesn’t feel good to me.”

Steve Perry recalled joining Journey in 1977 during the recording of the following year's Infinity album and partnering with Neal Schon: “I certainly was the new kid on the block when I joined them, but I was okay with that — bring it on! And wasn't afraid of reachin' and I think we pushed each other. The more I would reach, the more I was demanding on him to do something and the more he would come up with things, the more I'd be demanding him to come up with something that would work with him. It was a very important driving force.”

Steve Perry told us that the passage of time only further solidifies his opinion of how incredible Journey was during its heyday: “What a great band we once were. What a great band. I think the older get the more I'm able to look back at the forest now, 'cause I certainly walked out of the trees. I think everybody was just following their heart and their nose and following that lead. Just doing what we do. We're a band. We record, we rock, we instinctually reach for what we believe's a good idea — and argue about stuff, agree, disagree and move forward. And we were just crankin'.”

When we last caught up with Steve Perry, he told us it was a long road– both personally and creatively — to get from the end of Journey to where he is today: “When I left the group, 31 years ago — in about February of '87, I think — when I first said, 'I'm walkin' away,' I lost my passion for it and that was frightening to me because I discovered a passion for music and singing when I was, like, six, seven years old; and it had never left me, and it had gone away and that scared the hell outta me. So, I knew the only thing I could do was stop. After an incredible, amazing ride — being in a band like Journey, it was like being in a satellite circling the Earth for a while. It was time to come down and land in my hometown again and reconnect.”

We asked Steve Perry if it seems like he's coming back to an entire new world — or does the music business feel like home sweet home to him: “I don't know if its coming back into anything familiar because it seems like everything's changed. I've changed, the world is different, the whole process is different — but somewhat the same, y'know, as far as trying to let people know that I have new music. But, it seems so different, y'know? It really does; we have an Internet now, we have downloading, we have streaming, we have not a lot of retail out there, and so now, more importantly that ever — and I feel personally good about this — it's more about the music now, because of the change of the world than ever before.”

The ongoing massive success of “Don't Stop Believin'” doesn't surprise Steve Perry, who told us he was aware of the sing's potential by the reaction it received in the concert halls: “It's a funny thing, because though those other songs were hits — bonafide radio hits — whenever we played 'Don't Stop Believin'; if you see the Journey DVD live, it's 1981 Houston, it's called. If you see that DVD that was filmed in Houston back then, that song gets a response like it's getting now to the live audience. So my, point is, during the live shows that song always got a great response — it just wasn't a radio hit.”