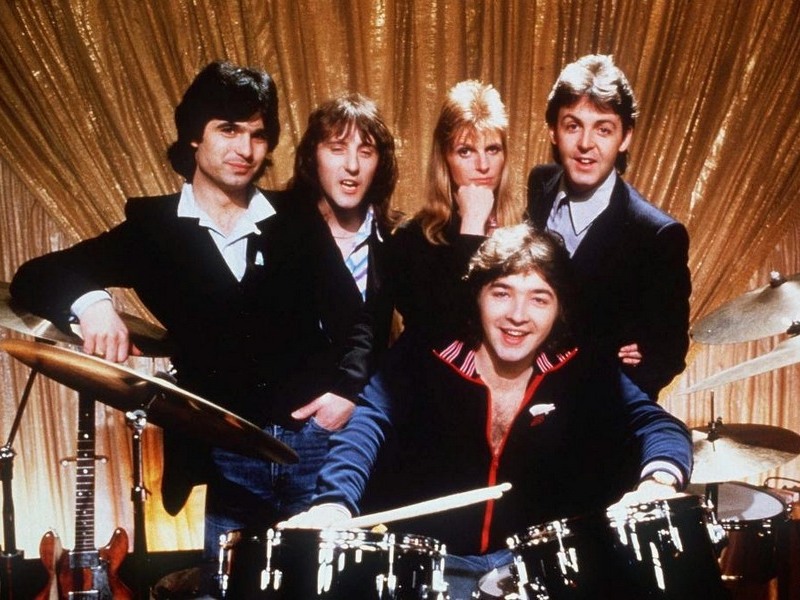 It was 40 years ago today (January 16th, 1980) that Paul McCartney was arrested in Tokyo, Japan for bringing 7.7 ounces of marijuana into the country. Fans were stunned at McCartney's action seeing as how he had lobbied so hard to be granted a work visa to perform in Japan after Wings was turned away in 1975 due to his previous drug busts. McCartney made no effort to conceal the large plastic bag of pot; instead he simply placed it among his clothes in his suitcase.

Wings' 11 concerts — which were to be the second leg of a proposed world tour — were quickly canceled. McCartney, who was facing a seven-year prison sentence, was known in the detention center as “Prisoner Number 22” and spent his time in his eight-by-four cell exercising and reading science fiction books brought to him by wife Linda McCartney. Rather than accept special treatment, McCartney opted to bathe with the fellow prisoners during his nine-day stay behind bars.

George Harrison was the only former Beatle to formally reach out to the McCartney's during the ordeal, sending an international telegram to the Hotel Okura for Paul and Linda stating: “Thinking of you all with love. Keep your spirits high. Nice to have you back home again soon. God bless. Love, George and Olivia.”

According to several legends John Lennon and Yoko Ono played a crucial role in the McCartney bust and release. According to one scenario, while heading West through New York City, McCartney called Lennon to share some of this “dynamite weed” he'd scored. Lennon blew McCartney off, but infuriated that the McCartney's would be staying in the Presidential Suite at the Hotel Okura — where the Lennon's stayed each summer — thus ruining their “hotel karma,” he complained to Yoko. According to several Lennon insiders, Yoko used her influence to tip off the customs department to the contents of McCartney's suitcase. Others believe that it was Yoko who pulled strings in getting McCartney off the hook and deported — rather than jailed for the full seven-year term he faced for trafficking. McCartney was released from jail and immediately deported on January 25th, 1980.

Legendary rock photographer Bob Gruen was with John Lennon and Paul McCartney in December 1975 when during a break in their “Wings Over The World” tour, the McCartney's visited the Lennon's at the Dakota. Gruen recalled McCartney being upset over the cancellation of his recently scheduled Japanese dates after being denied a work visa due to previous pot charges: “Paul was saying how much he was really looking to going back, and that's why I was really surprised when he did get permission to go back that he went back with bag of pot — right on top the suitcase, of good Hawaiian pot (laughs)! You just can't. . . He was on his way from Hawaii. I can understand why he had it (laughs). I remember asking John one time, actually, like, 'How could he do that?' — and John just said, 'Well, as a Beatle he just never expected that anybody would ever open his bag. It just never happened.'”

McCartney reexamined the entire Tokyo bust a decade later while compiling the 2001 solo documentary Wingspan: “Looking back on it from this perspective, I can't believe I did it. It's wacky, y'know, and this comes over in the film, 'cause we devote a segment to that. I think, 'I do not believe. . . ' And when you see the guy in customs opening my suitcase and pulling out not a small amount — the guy is pulling out, it's a huge amount of it — I do not know what was going through my head, tell you the truth (laughs), and it makes me go cold just to watch that segment.”

We asked him if he thinks subconsciously he might've actually wanted to get busted: “I think that it might, psychologically, it might have been that. There might have been something to do with that, because I think I was ready to get out of Wings. I think also, more importantly, we hadn't really rehearsed much for that tour, and I felt very under-rehearsed. I cannot believe that I would have myself busted and put in jail nine days just to get out of a group. I mean, let's face it, there are easier ways to do it than that — and also having to pay a million (British) pounds to the promoters in default. I think the only thing; it might have just been some deep, psychological thing. It's a weird period for me.”

Author Christopher Sanford, who wrote the 2004 biography, McCartney, says that the Japan bust essentially ended Wings' live career: “He did some thinking in that jail cell. And I know Linda had a tepid reaction, at best, to going out on the road. And I suspect that she probably sat down with him when they got home after that ordeal, and said 'What the hell are we doing here? We don't need the money, the kids don't need to do this, and let's go back to the farm.'”

McCartney's 1980 Japanese pot bust wasn't his last run-in with the law. In 1984, McCartney was busted for possession inside his Barbados resort villa after buying pot on the beach. It was McCartney's fourth pot-related arrest, having been arrested twice for possession in 1972: once after being mailed pot while tour in Sweden, and again later that year for growing the illegal weed on his Scottish farm. At the time McCartney told authorities that he had been given seeds by fans and was unaware that they would “come up illegal.”

McCartney has had only one pot run-in in America. In 1975, while driving in Los Angeles, the McCartney's were busted for possession of pot after blowing through a red light, with the car — allegedly — almost completely smoke-filled. Linda, who was a U.S. citizen, told police that the pot was hers, and was arrested and later fined.

After the 1980 bust in Japan, McCartney canceled all the group's scheduled dates and in May released McCartney II, his first solo album in a decade.

Wings recorded sporadically in 1980, putting finishing touches on a still-unreleased album of outtakes titled Cold Cuts, as well as holding two sets of rehearsals in July and October for an album which was to be produced by the Beatles' producer George Martin. To the group's dismay, when McCartney and Martin began the sessions that fall for the Tug Of War album, McCartney was recording as a solo act.

Flashback: The Who Releases 'Quadrophenia'